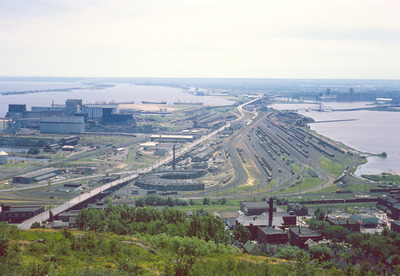 Rail yard at Rices Point, on the shore of Lake Superior. The yard was owned by Northwestern Pacific Railroad (NP) at the time of this photograph (1964). The Blatnik Bridge, an automobile bridge, was completed in 1961 and carried auto traffic between Superior, Wisconsin an Duluth, Minnesota on Route 535 and US 53. The railway bridges seen in this photo are steel swing truss spans, which means the bridges would rotate to allow for boats to pass. They were built in the late 19th century and have since been demolished.