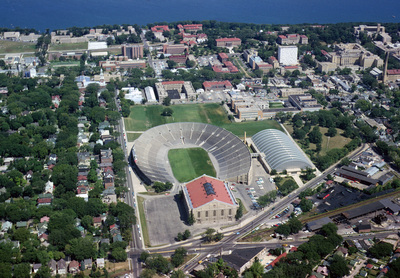 Camp Randall Field was a former Union Army training ground that was donated to the University of Wisconsin in 1893. It was quickly put to use as an athletic field. After numerous problems with the original wooden bleachers, culminating in a collapse of three sections during a 1915 game, concrete seating was first constructed and opened in 1917. This photograph from 1964 shows the stadiums former horseshoe shape. In the following years an upper deck and other seating was added.

To the south of the field is the Wisconsin Field House which was constructed using a design by local architect Arthur Peabody. The structure hosts both athletic events and public events such as concerts and gatherings. Built in a style that resembles the Italian Renaissance, the field house was completed in 1930.