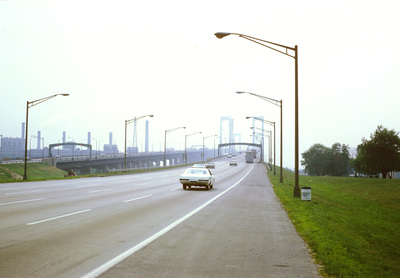 The Delaware Memorial Bridge was built in two spans. The first, completed in 1951, is on the left in this photograph, is now used to carry New Jersey bound traffic on Interstate Highway 295. Originally it carried traffic in both directions, but within a decade a second span was added because of large amounts of traffic from the newly constructed Delaware turnpike. The second span was finished in 1968, only two years before this photograph was made.

This photograph shows the Delaware Memorial Bridge from New Jersey, the industrial structure at the left is on the New Jersey shore of the Delaware River.

The original span of the Delaware Memorial Bridge was built with consulatation from master designer Othmar Ammann, who designed many of the most famous bridges in New York, including the George Washington Bridge and the Triborough Bridge. He is quoted in 1954 as saying:

Mere size and proportion are not the outstanding merit of a bridge; a bridge should be handed down to posterity as a truly monumental structure which will cast credit on the aesthetic sense of present generations.