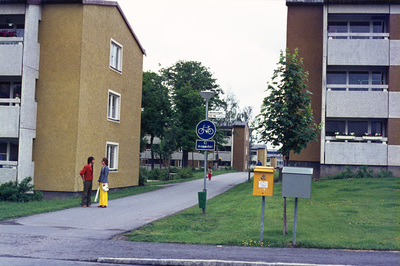 While the Million Programme, a nation wide effort in the 1960s to create one million new homes in Sweden, has been criticized as creating concrete high-rises that are a blemish on the city’s skyline, many of the home were also small three floored structures (pictured) and single family homes. This photograph shows a cycle path in a neighborhood in Skärholmen, a suburban district of Stockholm.