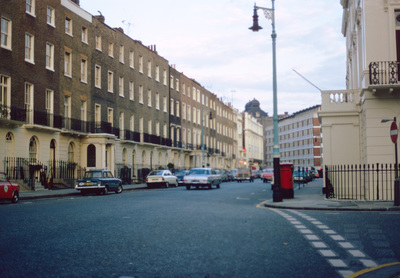 Eaton Square is actually a long narrow square west of Buckingham Palace in Belgravia, a district of Central London. Most of Belgravia was developed, under the supervision of Thomas Cubitt, when George IV commissioned the rebuilding of Buckingham Palace. Cubitt based his plan for Belgravia on four squares which were linked by roads. Eaton Square was completed in the year of Cubitt’s death, 1855. This photograph, taken in 1972, shows housing on one of it’s six terraces.