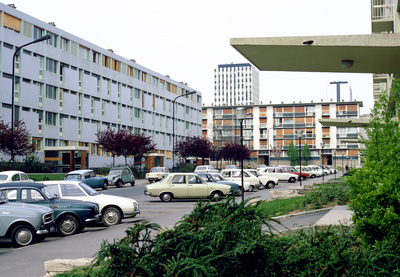 This 1973 photograph shows an habitation à loyer modéré (HLMs, English: ”housing at moderated rents”), which is similar to housing projects in the United States built around the same time. The HLM pictured is in Sarcelles, a French commune approximately 16 kilometers north of Paris. The area is home to a sizable immigrant population, the majority of which are Algerian Jews and Northwest Africans, but also large numbers of Maghrebi Muslim immigrants. HLMs were built during the 1950s and 1960s in response to booming population and lack of housing due to a halt on construction during the second world war.