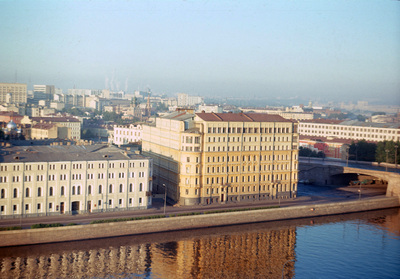 The large building at the right was, at the time of this photograph, the Hotel Bucharest. The original structure, dating to 1898, was designed by local architect Alexander Ivanov. During the 20th century the building changed ownership numerous times and has undergone many renovations, most recently in 1992. Presently it is operated as the Hotel Baltschug Kempinski Moscow. The building is on Balchug (or Boloto), an island in Moscow that lies between the Moskva River (pictured) and the Vodootvodny Canal.

Also visible, just left of center, is the five domed Church of the Resurrection in Kadashi, a 17th century Russian Orthodox Church. It is notable for it’s design, a brick tiered structure that incorporates a bell tower. The incorporation of the bell tower creates harmony between it and the dome structure, a design carried over from earlier wooden structures. Kadashi Church is also notable for it’s decoration in the Moscow baroque style, which is particular to the late 17th century. in the 20th century the Soviets used the church for storage of KGB archives. As of 2006 the church has been returned to the Russian Orthodox church.