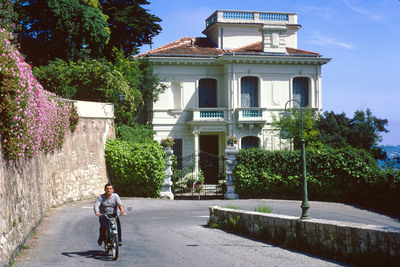 The Moyenne Corniche connects Mento to Nice and runs through the Côte d’Azur (English: French Riviera) and is named such because it is the middle cliff road between a higher and lower road. The French Riviera has long been the vacation land and playground for the rich and powerful, beginning in the 18th century as a winter resort for British aristocrats and expanding when the railway was introduced in the 19th century. The residence seen in this photograph (made in 1969) is typical of the villas in the Côte d’Azur. According to Smolski, this photograph was taken somewhere on the Moyenne Corniche between Nice and Monaco.