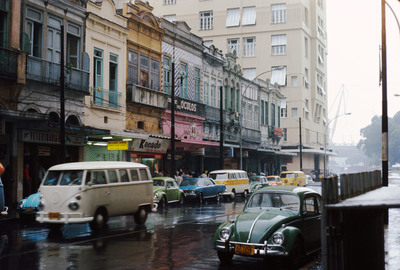 This photograph shows contrasting styles of architecture in downtown Rio de Janeiro. Here we see a row of 19th century buildings on Rua Acre with the modernist twenty two story building, The Night, at the end of the street. The older buildings are examples of 19th century eclecticism, a trend in European architecture adapted in Rio de Janeiro to reflect the landscape and the temperament of the local residents (Evenson, 75). In reaction to the choas of 19th century architecture, the modern movement, another European trend that found it’s way to Brazil, reflected the new industrial realities of the time. The Night (Portuguese: A Noite), designed by architect Joseph Spin, is an early example of modernism in Brazilian architecture and a precursor to the Art Deco style that would soon appear all over the city.