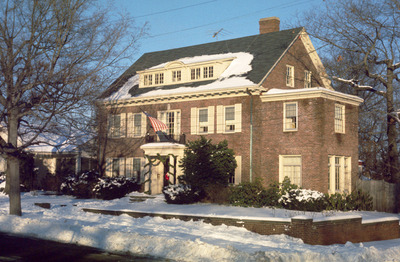 This photograph shows the residence of former Providence Mayor, Vincent “Buddy” Cianci. The house is located on the east side of Providence, the most affluent neighborhood of the city, notable for it’s high property values. This photograph was taken in 1976, and Smolski notes that the value of the home was $108,000 in 1972. In the four years it had risen to $150,000. In addition to his work in Providence’s Renaissance phase, which made the city more tourist friendly and economically viable, Cianci is notable for serving twenty one years as mayor and his two felony convictions received while in office.