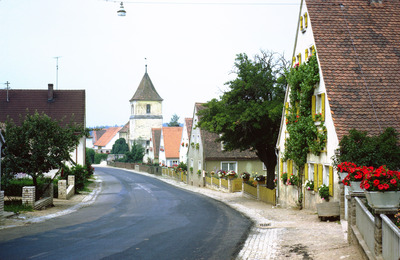 Dornhausen is a municipality in Bovaria, Germany. This 1969 photograph shows the church on main road 13. This small village had a population of 232 in a 2010 census.

Notable in this 1969 photograph are the flower beds lining the road, which were installed because of local beautification measures that were carried out in the 1960s. In addition to beautification the village also installed a local sewer system as a part of municipal reform in Bavaria (1971-1980), which aimed to create efficiency between the villages and counties.