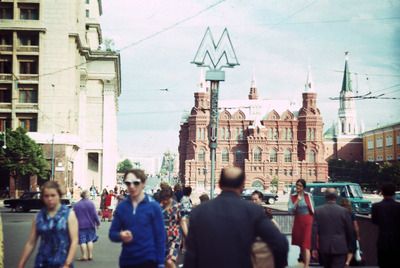 The State Historical Museum is located at the end of Red Square in Moscow. It was designed by Sherwood and Semyonov (Berton, 177) at the end of the nineteenth century. It’s facade employs a psuedo-Russian style which arbitrarily incorporates designs from older wooden architecture and medieval Russian motifs on cube shaped classical structures. In the translation, ironically, the meaning and significance has been lost and has been criticized by some as appearing contrived, perhaps reflecting the architects self consciousness of the buildings proximity to the glorious architecture of the St. Basil.