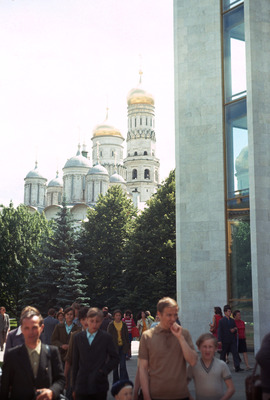 The taller building in the foreground, and located right behind the Cathedral of the Annunciation, is the Ivan The Great Bell Tower. The Bell-Tower was built in 1505-1508 by Italian architect Bon Fryazin. A century later another arcade for bells was added to the Bell-Tower. The bell tower was said to be built for the cathedrals that surround the tower since they did not have their own belfries. The bell tower is also considered to be located in Moscow’s geographic center.

The Ivan the Great Bell Tower contains 24 bells, 18 small bells that hang in the middle of the tower with 6 larger bells located above. At the beginning of the 17th century, the tower was extended to 21 meters to reach the height that it now stands at today. The upper tier and cupola were added by Boris Godunov in 1600. The bell tower is now a museum dedicated to the history of Moscow’s architectural complex.