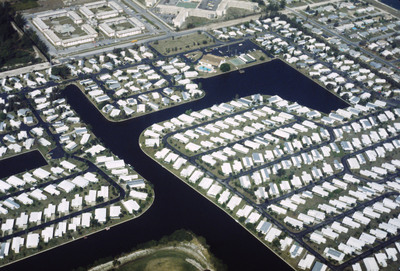 These housing developments, built on various water-ways through what can be an environmentally harmful dredging & filling process, can be found all over the coasts of St. Petersburg. Much of these neighborhoods were developed in the early 1950’s along the Gulf Beaches and western St. Petersburg as the demand for waterfront property grew. There are more than a few examples of these kinds of “finger-shaped” neighborhoods crammed into coastal areas of St. Petersburg. Smolski says that suburban sprawl can be a”tremendous energy waster” and refers to such neighborhoods as places where “it is impossible to tell where a community ends and the country begins.”