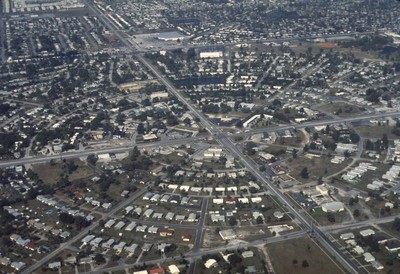 This is an aerial photograph of Saint Petersburg’s Meadowlawn Neighborhood. The land this neighborhood is built on was once a bog with woods and weeds as well as a place where cattle would come to graze from two local dairy farmers. Before it was developed, the land here was prone to flooding and had to be filled before anything could be built on it. This filling processes was done by digging lakes and using the extra soil as landfill.

Meadowlawn was originally named and developed by John Thea Haynsworth Jr. in 1953. In the first year of development 250 homes were completed as well as some shopping centers, a lake and a park. The St. Petersburg Times called Meadowlawn a “fast growing city.” When Meadowland was in its initial stages of development, many people thought that it would be too far away from St. Petersburg to interest future home buyers. Five decades later, the neighborhood would have more than 5,500 residents and 2,220 homes along with a number of business, offices and a school.