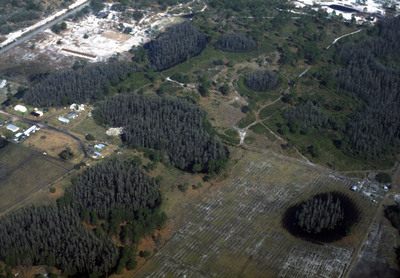 St. Petersburg and Pinellas County lies in what is called a “sinkhole alley.” The towns of Pasco, Hillsborough and Hernando, which leads the state in sinkhole claims, have all had issues concerning sinkholes developing on private property. Pictured is a sinkhole located outside of the city that Smolski photographed in 1978. From 2007 to 2012 there have been numerous reports of sinkholes appearing all over the city and even within a few miles of Beach Drive, a popular spot for restaurants and shops.

St. Petersburg is prone to sinkholes due to its geological make-up. The region sits on underground limestone caverns full of voids that can collapse because of fluctuating water levels. Pinellas County, outside of St. Petersburg, is built on sandy soil, so occurrences of sinkholes in the area are greater than the rest of the region.