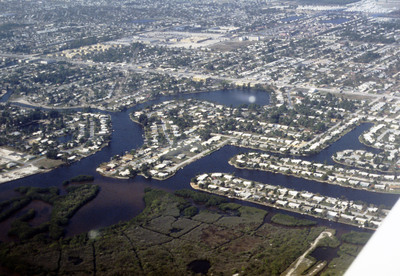 These housing developments, built on various water-ways through dredging & filling, can be found all over the coasts of St. Petersburg. Much of these neighborhoods were developed in the early 1950’s during a period of dredging and filling along the Gulf Beaches and western St. Petersburg as the demand for waterfront property grew.

In the 1960’s the construction of two important bridges greatly improved property values of the coastal and the inner coastal properties of St. Petersburg. The Howard Frankland Bridge was opened connects Hillsborough County with Pinellas County, and in 1962, the Pinellas Bayway was finished, which connected that county to the beaches located along the coast. These bridges, along with the dredging of the 1950’s, led to greater development of the neighborhoods seen on the “finger” fills of land in the photo.