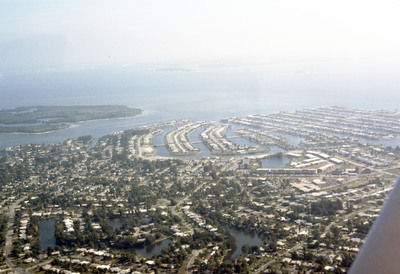 These housing developments, built on various water ways through a process of dredging & filling, can be found all over the coasts of St. Petersburg. Many of these neighborhoods were developed in the early 1950s along the Gulf Beaches and western St. Petersburg as the demand for waterfront property grew.

In the 1960s the construction of various bridges, along with more dredging projects, led to the development of more coastal neighborhoods. Dredging operations has had adverse consequences on Boca Ciega Bay, as dredging, filling and channeling destroyed thousands of acres of sea grasses and their fisheries. Eventually, conditions declined so badly in the bay that the State of Florida created the Boca Ciega Bay Aquatic Preserve Act in 1969.

Although having a house on the water is an attractive prospect for most people, the precarious location of these neighborhoods so close to the Gulf Of Mexico could one day lead to dangerous consequences for the neighborhood residents in the event of a hurricane or further land erosion. Saint Petersburg is located on a peninsula.