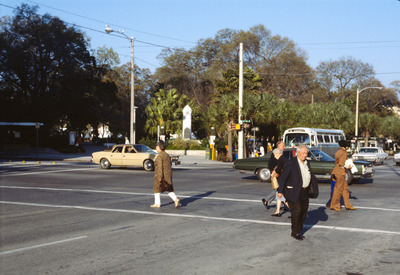 Pictured across the street on the corner of 1st and 4th Avenues (North) in St. Petersburg is the World War Heroes Memorial in Williams Park. Engrave with the word “loyalty” located at the top, this memorial was erected by the St. Petersburg chapter of American War Mothers to commemorate those who fought in the first World War from 1917-1918. The memorial was built on January 1st 1938 and still stands in the park today. A quote from the memorial reads “God gave us sons: we gave them our country and our country gave them back to God.”

Parks are an important addition to all cities. They are a place for a cities’ historical markers to reside and they offer a brief respite from the urban sprawl around them. Smolski says that urban parks are “the lungs of the city” which provide “breathing space in a harsh concrete & asphalt environment.”