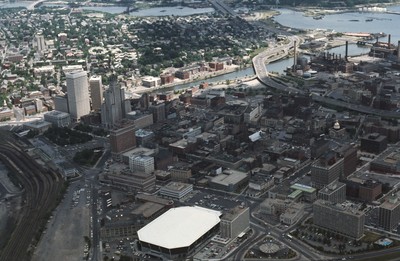 Aerial view of Providence downtown area. Among America’s oldest cities, Providence has a special sense of place. Like its contemporaries, it has been built and rebuilt many times. Development, however, has not resulted in wholesale destruction and replacement, but in complex layering, which reveals the built legacies created by generations of earlier residents. Together, Providence, as Rhode Island’s capital city, and Newport have since the American Revolution been the state’s economic, political, social, and architectural pacesetters.