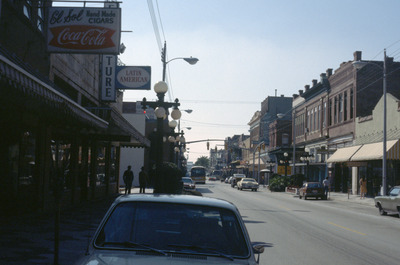 Ybor City’s 7th Avenue spans 11 blocks between 26th Street and the Nick Nuccio Parkway. Having been settled by many cigar manufacturers, 7th Avenue was known as the heart of the cigar industry. At one point, there were over 230 factories established in this location. On the far left hand side of this image is the shop sign for El Sol Cigars. Started in 1929 by Guy Saitta, this shop is Ybor City’s oldest Cigar Store. He and his wife, both master cigar makers, would make and sell their Smok-A-Cuba cigars right out of their business. The store in this picture is seen in its original location on 7th Avenue in Ybor City. Since this photograph was taken in 1978, the shop has moved to the corner of 50th Street & Adamo Drive. In more recent years, the company has expanded and now has small cigar factories located in Tampa, Honduras, Nicaragua, and the Dominican Republic.