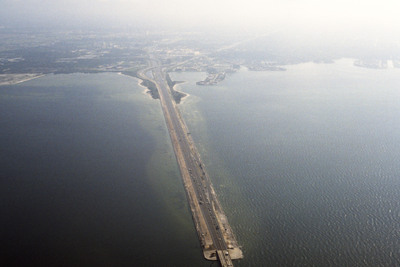 This is an aerial shot of the Howard Frankland Bridge connecting St. Petersburg to Tampa showing Causeway 275 on the Tampa side. The body of water it rests atop is the Old Tampa Bay. It was initially completed in the 1960s, and comprised of four lanes that were dangerously congested with traffic. In 1989, it underwent further construction and a second span of the bridge was created consisting of 8 lanes, 4 for northbound traffic and 4 for southbound traffic. The newly renovated bridge was eventually opened to traffic in 1991.