Florida: Aerial of Downtown Tampa (1 of 3) 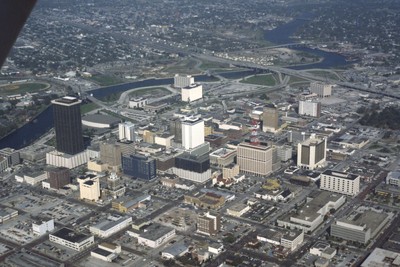 This is an aerial shot taken of downtown Tampa. Pictured at the far left of this picture is a tall brown building known formerly as the Lykes Building. Presently, it is known as Park Tower. Located at 400 North Tampa Street, this skyscraper was built in the modern style and has 36 floors.

The white building in the middle with semicircle windows aligning the top is known as the Franklin Exchange Building. Located at 655 North Franklin Street, this building was built in the international style and has 22 floors. During the years of 1966-1972, it was known as the tallest building in Tampa, until it was succeeded by Park Tower.

Also noteworthy is the black and white building almost directly in front of the Franklin Exchange Building called the Madison Building. Located at 412 East Madison Street, this building is utilized as office space.