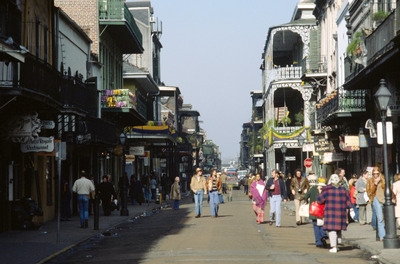 Bourbon Street is one of the most celebrated areas of Mardi Gras in New Orleans. The street is most known for its burlesque clubs and lively night life. Some of the major attractions include: The Royal Sonesta Hotel, Jean Lafitte’s Blacksmith Shop, and the Old Absinthe House. All of the buildings on this street reflect the folklore and beauty of the 1700s. The major event that takes place on this street is called The Bourbon Street Awards. Up until 1980, the awards were hosted by Cafe-Lafitte-In-Exile, the oldest gay bar in the country. Since the event has gained huge crowds, it has recently moved to the corner or Bourbon Street and St. Ann Street. This corner is commonly known as the “Gay Mardi Gras.”