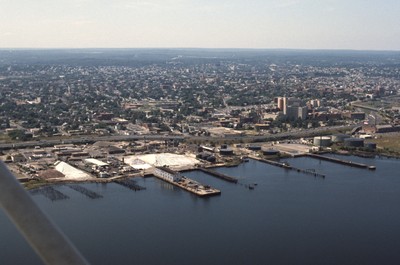 Looking west over Providence Harbor, this shot shows a portion of the ten miles of commercial waterfront on Narragansett Bay. The industrial waterfront has been “long-overlooked” despite its historic role as the source Providence’s original prosperity. However, today it stands as one of only two deep-water ports in New England, and one of the busiest multimodal facilities for international and domestic distribution. As of 2010, the Port of Providence has been seeking to attain federal funds to upgrade its facilities in order to establish the port as a stop along the Marine Highway. The ReNEWable Port project is an undertaking to improve the port’s impact on not only the regional economy but also the environment This program, if approved by the USDOT would generate between 500-1,000 jobs (in addition to the existing 2,400) and increase the already substantial revenue generated for the city by the port. It would furthermore help eliminate the more costly and environmentally damaging practice of shipping freight by truck from the Port of Newark to New England. Interstate 95 crosses the picture from left to right. Rhode Island and Women & Infants hospitals appear to the north.