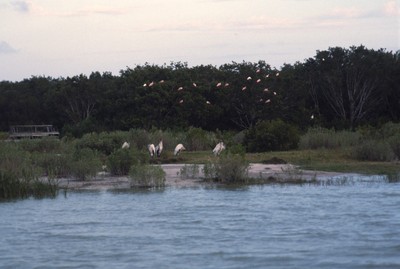 Captured in this picture is some of the Everglades’ wildlife amongst its dense marshes. A cluster of Roseate Spoonbill’s can be seen nesting in the tress of the background of this picture. This species of birds is native to the coastal areas of Florida, Mexico, and South America. The bird is known for its pink color, which is derived from its diet and for its nesting site along the tops of shrubs or mangrove trees.