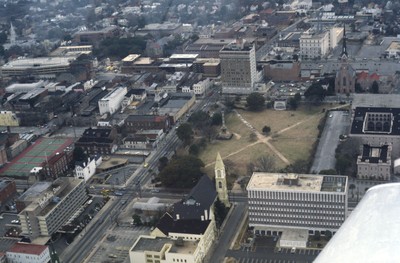 The rectangular plot of land seen in the center of this aerial shot is known as Marion Square. The grounds are home to many monuments as well as the South Carolina State Arsenal, aka the Old Citadel. The tall statue to the middle left of the area is the John C. Calhoun Statue. The monument was originally constructed in 1858 in honor of John Calhoun, the former vice president, senator, and secretary of state. It was however replaced in 1896 due to its poor quality. This 115 foot tall statue now stands looking out over all of the city.

The Old Citadel, which was home to the county offices through much of the twentieth century, was remodeled in the 1990s into a luxury hotel The reuse came at the expense of virtually all of the buildings historic integrity.