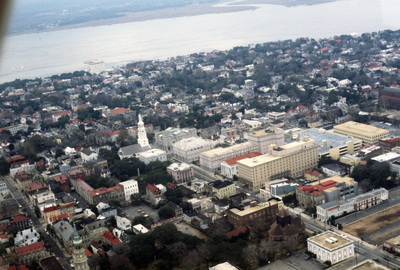 This aerial image of downtown Charleston has Meeting St. running diagonally across the picture plane. St. Michael’s Church (1752-61) is at center left, is significant because it is the oldest religious structure in the city. It was designed by an architect by the name of Gibson (Simons & Lapham) and continues to be an active Episcopal church.

Just up the street is the Fireproof Building, also known as the County Records Building. It was built in 1822 and is the country’s oldest surviving fireproof building. The architect, Robert Mills, relied primarily on removing combustible materials to make the building fireproof. It features stairwells lit by a central skylight. Some of the buildings plans were altered on site by John Spidle, the construction architect.

Across the street is Hibernian Hall (1840), which was used in the Democratic Convention of 1860. The front of the building features and Ionic portico with a gilded Irish harp over the door, and indicator of the Hibernian Society’s original function as a group to aid Irish imigrants.

On the horizon, just before the harbor, is the Fort Sumter Hotel, completed in the 1920s as a luxury hotel and later turned into residential housing.

Poston, Jonathan H. The Buildings of Charleston: A Guide to the City’s Architecture. (Columbia: University of South Carolina Press, 1997) pp. 186-187