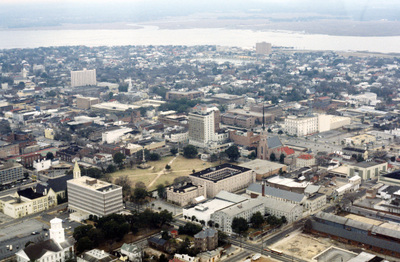 This aerial photograph looks south west across the peninsula that is downtown Charleston. The mouth of the Ashley River empties into the Charleston Harbor on the horizon, while the foreground is spotted with the city’s many historical and architecturally significant buildings.

In the foreground is the South Carolina State Aresenal, also known as the Old Citadel, which is distinguished by it’s Romanesque architecture and interior courtyard. Designed by Frederkick Wesner in 1822, it was finished by the end of the decade. In 1843 the site became the South Carolina Military College. In 1995 the building was ‘gutted’ while being fit for reuse as a hotel. Although the central arch is original, much of the remaining structure has been renovated or rebuilt since the 1820s.

Adjacent to the Old Citadel is the city’s greenspace, Marion Square. The square is home to many monuments and memorials.

Also of note are the many religious structures in the photograph, which are due in part to Charleston’s history of religious tolerance dating back to the Colonial period.

Poston, Jonathan H. The Buildings of Charleston: A Guide to the City’s Architecture. (Columbia: University of South Carolina Press, 1997) pp. 394