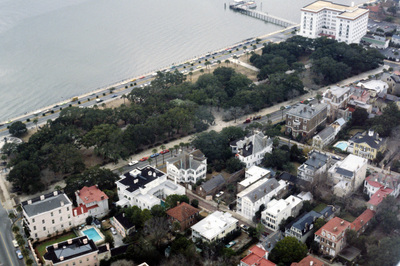 This photograph of downtown Charleston reflects the city’s prosperity during the nineteenth century. At the center left of the frame is the Battery Carriage House Inn, a large home built by Samuel N. Stevens in 1843. Colonel Lathers commissioned architect John. H. Dereeux before 1870 to design additions, including a large frieze and cornice, and a fish-scaled mansard roof. It is now a bed & breakfast that appeals to tourists interested in the city’s historical offerings.

At the top corner right of the frame is the Fort Sumter Hotel, constructed in the 1920s. Designed by the architect G. Lloyd Preacher, it was once billed as the peninsula’s only luxury hotel. When it was completed in 1923 there were cries of outburst from the city’s preservationist who disliked it’s six story rise above the city and it’s Spanish Colonial design. The docks seen in this photo were removed in the early 1970s, the hotel closed in 1974 and was later converted into condominiums.

Lining the short is White Point Gardens, a public park that is characterized by it’s numerous shady oak trees.

Poston, Jonathan H. The Buildings of Charleston: A Guide to the City’s Architecture. (Columbia: University of South Carolina Press, 1997) pp. 225, 269