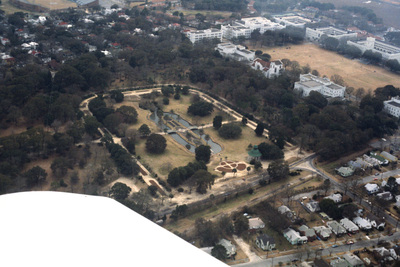 Hampton Park, named for Confederate General Wade Hampton III, was the site of a race track, a prisoner of war camp, a plantation, and even a trade exposition before it was finally developed as a park in 1906. The bandstand, which can be seen in this photograph, was retained from the trade exposition and moved to it’s present location. By the late 20th century the park had become run-down and a haven for crime. It was redeveloped in the 1980s and has experienced a renaissance as a destination for recreational activities.