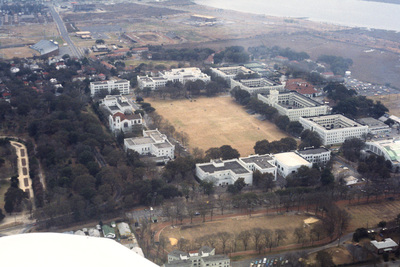 The Citadel is a military college in South Carolina that has it’s roots in the nineteenth century, and was originally used by Confederate soldiers in the nineteenth century. Federal troops occupied the original Citadel during the reconstruction until 1879 at which time it returned to use as a military school. The school was relocated to the campus, as pictured, by the banks of the Ashley River in 1922. The architecture at the new Citadel, which occupies several buildings, was based on the Romanaesque design of the original Citadel by Frederick Wesner.