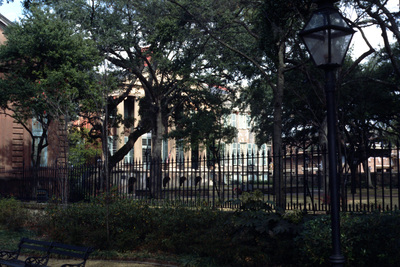 The College of Charleston is one of the oldest institutions of higher learning in the United States. It was founded in 1770. This photograph shows the quad and an obscured view of Randolph Hall. The building was created in two parts, the center of the building was began in 1828 and designed by architect William Strickland, who designed the building in the Greek Revival style. In the 1850s architect Edward B. White was commissioned to design the wings, giving the building elements of the Federal style, though both architects were champions of the Greek Revival style.