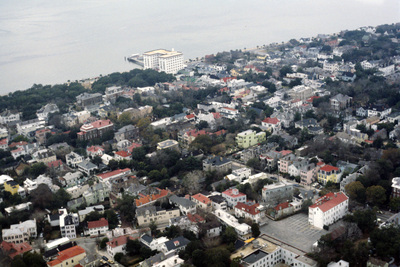 This aerial photograph of downtown Charleston shows the city’s low rise skyline along the Charleston Harbor. At the top center of the photograph is the Fort Sumter Hotel, a seven story structure that towers over the residential surroundings. Designed by G. Lloyd Preacher in the Mediterranean mode, the Fort Sumter Hotel was built in the 1920s and was advertised as the only luxury hotel on the peninsula. Many notable figures have stayed here, including John Kennedy during the Second World War. Today the hotel has been converted into residential property.