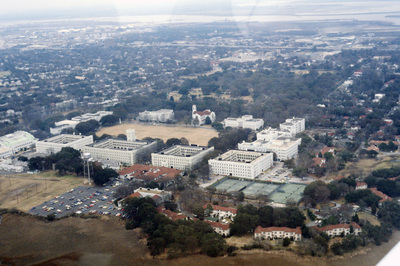 This photograph, taken in the late 1970s, is an aerial view of the Citadel: Military College of South Carolina. The Romanesque design of the buildings was based on the architecture of the Old Citadel, which was designed by Frederick Wesner in 1828.

Following Reconstruction the Old Citadel, which had been built in the 1830s in response to a slave revolt, resumed its function as a military college. By World War I, despite numerous structural additions, enrollment had outgrown the building and a new campus was constructed in Charleston.