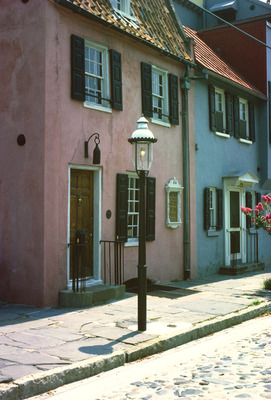 Built at the turn of the 18th century, Charleston, South Carolina’s Pink House gets its name from the coral Bermuda stone that was used to build it. Bermuda stone is unique in that it is soft and malleable, but when exposed to outside weather, it hardens and strengthens.

This pre-revolution tavern stands three stores tall, each story consisting of a single, square, 13 by 13 foot room. The third floor’s ceilings slant inward due to the roof. It has undergone a few restorations, including an addition of a wing on the southeast corner, and an office/library on the third floor.

The Pink House remains the oldest standing tavern in the South. Since it’s construction, it has been owned by many people who used it as a tavern, a publishing business, and now an art gallery.