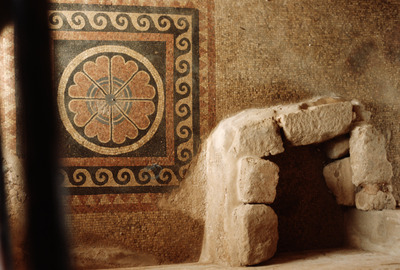 This photograph shows a Roman style bath built by King Herod at Masada. Masada was one of the fortresses built during Herod’s rule in the first century BC. Herod was generally unpopular with the Jews, so perhaps this is why he spent much effort building a luxurious palace at this remote location. About a century later Masada was taken by the Zealots, Jewish rebels against the Roman Empire. They managed to hold the fortress for seven years. The location of the fortress was forgotten for nearly two millennium. These roman style baths were discovered during excavations by the Israeli government in the 1960s.