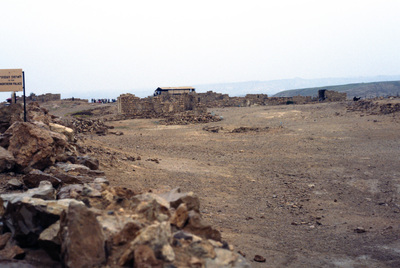 This photo is taken at the top of Masada, a horst that was used as a fortress by many ancient people. King Herod, in the first century BC, built an elaborate palace here, perhaps fearing he would have to go into isolation because of his unpopularity with the Jews. A little over a century later Masada was the last stand for the Zealots, a band of Jewish rebels who lived here for seven years until they were at last over taken by the Romans. A Roman road leads to the top of Masada which can still be traveled today. In this photograph the ruins of ancient structures and a group of visitors can be seen.