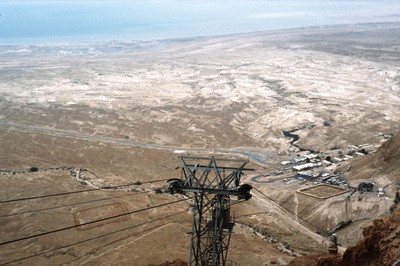 This photograph looks east from Masada towards the Dead Sea. Masada is a natural fortress that was most invested in by King Herod, who in the first century BC constructed a intricate palace atop this isolated horst. Masada was the site of a mass suicide by Jewish rebels and a massive siege by the Roman Army. Some of the Dead Sea scrolls were discovered here. The foreground of this photo shows a tower that is part of a cable car system which brings visitors and tourists to the top of Masada, as an alternative to walking.