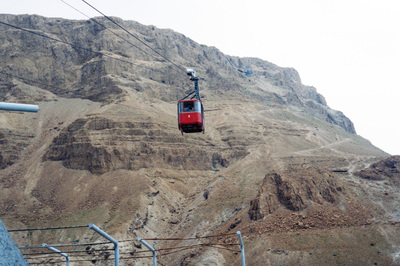 Masada, once a fortress in the last Jewish holdout against the Romans, represents bravery and self sacrifice to modern Jews, which ended in the mass suicide of nine hundred rebels. It is now reached by cable car for visitors. In the twentieth century some biblical chapters were discovered here as part of the Dead Sea Scrolls. This photograph shows a car ascending Masada in 1980.