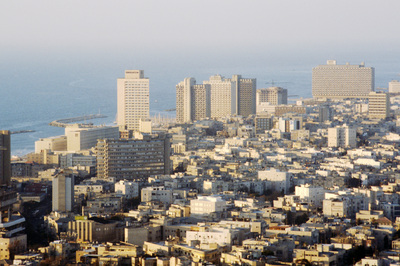 Tel Aviv is sometimes referred to as the Miami of the Middle East. Looking at this 1980 photograph it is easy to see why. The city’s architecture, much like Miami, is dominated by modernist structures in the Bauhaus and International styles. Here we can see how the hotels tower on Tel Aviv’s beach towers over the surrounding buildings, a testament to the economic importance of tourism in the city.

The city realized the economic potential as early as the 1920s and the first serious attempt to organize and capitalize on it was proposed in the Gruenblatt Plan which was approved in 1936. It built on the Geddes Plan for the city, which had passed a decade earlier, but also attempted to incorporate European style urban grids and wide streets into the city. The plan was unpopular with citizens because it essentially took the beach, a popular lesure destination for locals, away and capitalized on it as a tourist destination. The plan was ultimately scrapped, but the beach was developed, notably Atarim Square, and it continues to be a major draw for tourists and income for the city.