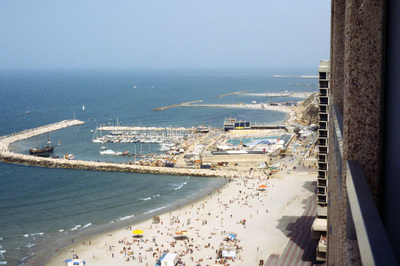 The Tel Aviv Beach was developed into a resort after it’s economic potential was realized by Mayor Dizengoff in the 1930s. Originally the development was to follow the Gruenblatt plan, which followed the Geddes plan for the city, but planned to develop the area as a tourist destination. The plan was ultimately scrapped, but the beach was developed to increase economic activity in the city. This photograph shows the draw of the beaches as well as the Tel Aviv Marina, which caters towards tourists rather than locals.