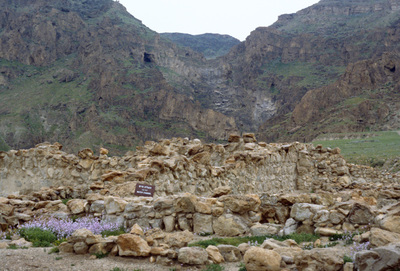 This photograph was taken in Qumran, the area where in 1947 (or late 1946) the Dead Sea Scrolls were discovered by three Bedouin shepherds. The caves are located about eight miles south of Jericho, in present day Israel. In this picture a sign can be seen that says ‘Water Channel’ and a cave entrance can be seen in the hills. During the winter rain water feeds a waterfall here.