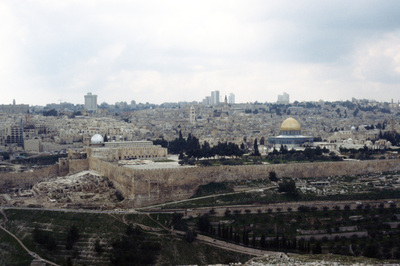 At the heart of Jerusalem lies the 35 acre spread of land known as The Noble Sanctuary. Its inner workings consist of various buildings and structures of importance to the country of Israel. These include: The Dome of the Rock, the Al-Aqsa Mosque, the Islamic museum, and several noted minarets. As a whole, this area encompasses around one sixth of Jerusalem. To the left of this image, the ruins of one of the city’s walls can be seen.