Roger Williams Park: Bandstand at the Casino (1 of 2) 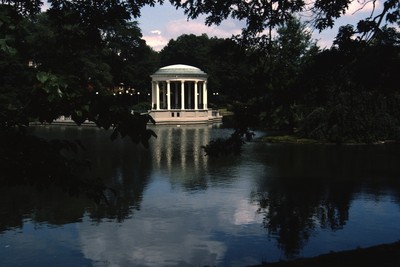 On Roosevelt Lake behind the Casino at Roger Williams Park sits the bandstand (John Hutchins Cady, 1915). According to Jordy, this classical revival structure has an “open, colonnaded Ionic rotunda as the climax of a metal-fenced, masonry platform for folding chairs.” J.H. Cady was a graduate a 1902 graduate of Brown University who became a renowned historical preservationist and architectural historian.