Jerusalem: Tomb of Bene Hezir and Tomb of Zechariah 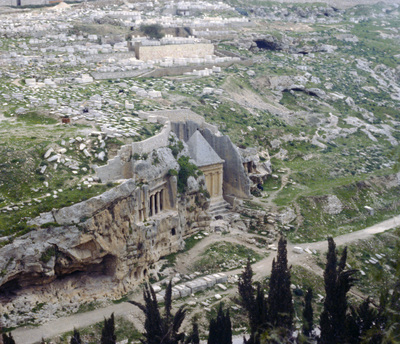 This photograph show’s two of the monumental tombs in Kidron Valley. The tomb at the left is the Bene Hezir tomb, or Sons of Hezir. The tomb is carved into rock with a porch featuring a Doric style facade. It is the oldest tomb in the Kidron Valley and is believed to have been constructed at the end of the Hasmonean period. Beside the Bene Hezir tomb is the Tomb of Zachariah constructed at the end of the first century. It is not actually a tomb but a memorial. It is a freestanding monolithic monument with Ionic columns carrying an Egyptian cornice.