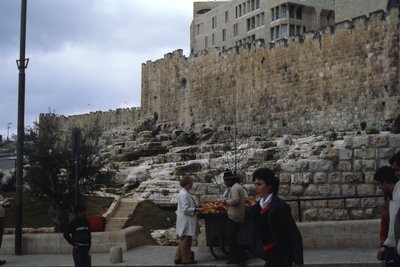 The Southeast end of the Eastern Wall in Jerusalem is also known as the east side of the Temple Mount wall. Clearly visible in the photo is the change in stone/pattern after about the 9th row. This is due to the fact that the Romans destroyed the wall in 70 AD, leaving only the lower 9 rows. Since then, the wall has been built back up using similar, but different stones. Also pertinent about this side of the wall is that it bends slightly to the right due to the extension that Hasmonenan added onto Solomon’s original wall.