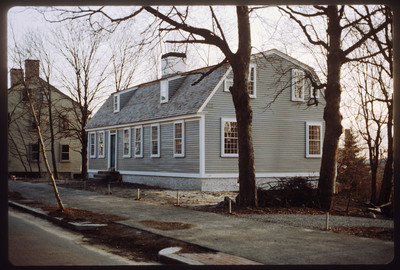 This late eighteenth-century Dutch gambrel-roofed farmhouse stood on Chalkstone Ave. where the parking lot to Roger Williams Hospital stands. Angela Brown Fischer, daughter of John Brown (d. 1979) moved this house opposite the Nightingale-Brown House at 357 Benefit St. (1791). John Brown owned this land and preferred a view from his house across the city without impediment. The house is set back from the street because it is a farm house and not original to the urban architecture of Benefit St. The interior has been renovated.