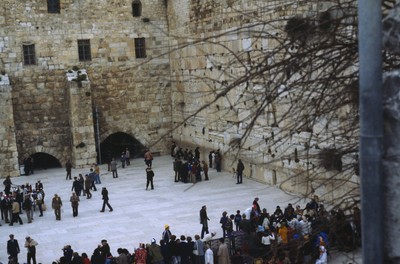 Seen in this picture are large crowds of Jewish folk that have come to pray at the wall. The prayer area, in which you will see varying amounts of people at varying times, is dedicated to the lower square near the wall. It is believed that the Divine Presence in the Temple never left, despite the Temple Mount being destroyed in 69 CE. Since it is nearly impossible to gain access into the newly restored temple, the wall is highly respected and serves as the Jews closest reality to heaven.