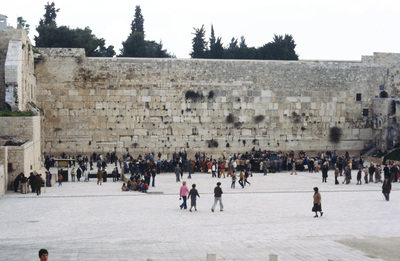 The Western Wall is a remnant of an ancient Jewish Temple constructed in 19 BCE. Since the fourth century it has been a destination for Jewish pilgrims since the fourth century. The Western Wall has been described as the Wailing Wall since the 19th century because often pilgrims over come with emotion weep at the base of the wall. This photograph shows groups of Jewish pilgrims in 1980.